There’s nothing like the sweet and bitter taste of cranberry. Cranberry Facts and fun trivia just don’t do justice to overall joy it can bring recipes and drinks.

But here are some cranberry facts you can use to impress your teacher: 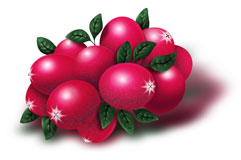 Cranberries contain Hippuric and Quinic acids – which helps to break up and prevent kidney stones. They also fight harmful bacterias and play a role in preventing bacteria from sticking the cell walls in the body.

It was once believed that the acid caused the urine to be acidic and thus prevented bacteria from living there. But more recent evidence shows the nutrients in cranberries prevent the bacteria from sticking the cell walls.