Schlosser starts the book off with a rousing tale of the “malling” of America. He talks about the rise of fast food restaurants across and how it coincided with the rise of women entering the workforce. Using data and statistics, Fast Food Nation describes the shift in U.S. attitude toward fast food, work, play and school.

It was precisely this shift that left to the rise in our fast food nation. With women at work, the roles traditionally ascribed to them got less focus. With less focus on the important duties of family life, women hired caretakers for their kids, molly maids for their kitchens and carpets and McDonald’s for the cooking.

He goes on to describe the American cultural landscape and how drive-in theaters, drive-thru restaurants and drive-up windows made us less interested in quality and more interested in convenience. 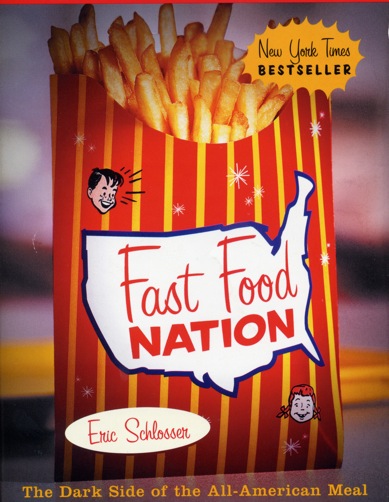 In a particularly poignant statement by Carl N Karcher, the founder of Carl’s Jr. restaurants, Eric Schlosser finds a quote that tells it all. When asked how he feels about the fast fooders, malls and subdivisions where his families orange groves once grew, Carl said “I couldn’t be happier. I believe in Progress”.

Titled Your Trusted Friends, chapter 2 is a Fast Food Nation summary of the marketing that has gone into changing our national consciousness about fast food. From Ronald McDonald to the happy mean, meal deal toys to employment universities.

He continues chapter 2 with a very interesting story of how Disney, McDonalds and NASA worked together despite all wanting to work alone. Schlosser also provides details of how Ray Croc funded his political agenda through campaign contributions to politicians.

Finally Fast Food Nation concludes this section with a great discussion on the emergence of child marketing. Whether that be the advent of Joe Camel, the discovery of Ronald McDonald or they myriad of other mascots directed at children, they all increased sales.

One of the more staggering statistics provided by Schlosser is the notion that the advent of Burger King’s Kids Clubs increased sales 300%.

And that’s just the tip of the iceberg when it comes to the picture created by Fast Food Nation. Summary thoughts on each chapter seemed pale compared the vast depth of knowledge each brings to the table.

Beyond the first two chapters of the book, prepare to be fascinated when you learn about school contracts with advertisers, the new drug caffeine, the fast food-ification of our local streets, legal spying by fast fooders using technology similar to the military’s Star Wars program, changing of the methods of production to meet the needs of fast food companies, and the efficiency which ended kitchens in fast food restaurants.

One thing he doesn’t cover near as thoroughly as Super Size Me did was the effects of fast food on the body. When putting the Fast Food Nation summary together before he even wrote, I wonder if he intended to focus more on society than on the individual.

You don’t want to miss the discussions on why French Fries taste so good, or why you can’t even trust local companies to produce fast food. The Fast Food Nation summary of our economies production of food will make you want to stand up and fight your local school district.

What we’ve changed over time in this country is stagger compared to where we used to be.
Author: Dan R Morris

From Fast Food Nation Summary to Effects of Fast Food