If you’re wondering about the true history of chocolate – meaning the Aztecs and Incas and how it came to be, we’ll answer that on a separate page. Here we’ll tell you exactly where does chocolate come from, and we’ll start with the beans.

Chocolate Comes From the Cacao Bean 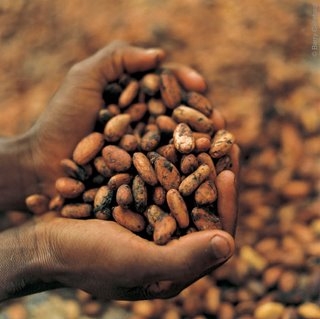 Strictly speaking, cocoa or cacao is a nut, the seed of a fruit, but is most commonly called cocoa beans, cocoa seeds, cocoa nuts, chocolate seeds, or chocolate beans.

Commercial cocoa growers and processors refer to the dried cocoa beans as cocoa nibs. The term cacao often refers to the beans before they are fermented and dried.

Cocoa pods take five to six months to ripen. In the typical cocoa plantation, the growers harvest the pods from the cocoa tree at the time of perfect ripeness, then remove the cocoa beans from the pods (about 45 beans per pod) by cutting the pods open with a machete knife.

The beans are then covered with banana leaves and left for about five days to ferment, which reduces the bitterness and develops an enhanced chocolate flavor. When they have reached the proper level of fermentation, the beans are then left to dry in the sun, where the brown color and the chocolate flavor intensifies. Then the now-finished cocoa beans are shipped to the cocoa buyers and processors.

So where does chocolate come from? We’re getting closer. . .

From the Cocoa Bean to Cocoa Liquor

Chocolate is manufactured from cocoa mass, the base product produced by processing the cocoa/cacao beans or nibs by fermenting and then roasting them to produce a liquid called chocolate liquor, which is very “thick” or viscous.

You might expect the cocoa mass to be solid or a kind of powder, but it is a thick liquid or paste because cacao beans are nuts, and all nuts contain fat – in this case the fat known as cocoa butter, which has a very high viscosity at room temperature, like soft butter made from dairy cream.

What Can We Make with Cocoa Liquor?

The chocolate liquor can be molded and hardened into the bitter chocolate known as unsweetened baking chocolate. Most people would not like to eat this chocolate because it is quite bitter in taste. Those who acquire a taste for it are able to eat this kind of sugar-free dark chocolate which is more healthy than other forms of chocolate. 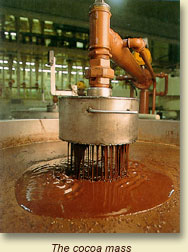 The chocolate liquor can also be machine pressed under great pressure to squeeze out most of the the fats known as cocoa butter and leave a flattened dry material called cocoa cake, also known as “cocoa solids”.

This cocoa cake can then be broken up or finely ground to produce a natural and unsweetened cocoa powder, which is used by chocolate manufacturers.

From Cocoa Powder to Edible Chocolate

To make a edible, tasty chocolate from the cocoa powder, a chocolate manufacturer will add some cocoa butter (the natural fat from the cocoa fruit) and some kind of sugar, usually refined white cane sugar.

If you stop there, the result is a dark chocolate. If you add milk and dairy products, you get creamy milk chocolate. Chemicals, additives, stiffeners and fillers create a chocolate candy. And you already know the ingredients of cake, chocolate bars and hot chocolate are.

So that’s it. That answers the question, “Where does chocolate come from?”

From Where Does Chocolate Come From to Health Benefits of Chocolate