Wines made with the healthiest grapes?

Determining the healthiest wines is not so hard if you look at one aspect at a time.

Let’s not start a war over the benefits of every single grape used to produce wine, but start narrowing the healthiest wines using grander categories.

Grape skins is what separate the wheat from the chaff. Since red wines leave the skins in longer than the other two, more of the good stuff is absorbed into the wine.

What is it about the Grape Skins?

The resveratrol, the polyphenols and the proanthocyanidins are found in high concentrations in the grape skins. These are the super heroes, the ones that help kill cancer cells, reduce blood pressure, and lower cholesterol. This is the whole kit and caboodle.

The wines richest in these fine nutrients are two-fold, the grapes that produced the most of these and then the wines that had contact with the skins the longest. It’s really hard to find either of these two things but here are some suggestions.

This table lists all the grapes by sweetness and acidity, and also by red and white. It’s a great chart to hang on the wall. Of all of those different grapes, these are considered to be the world’s healthiest: 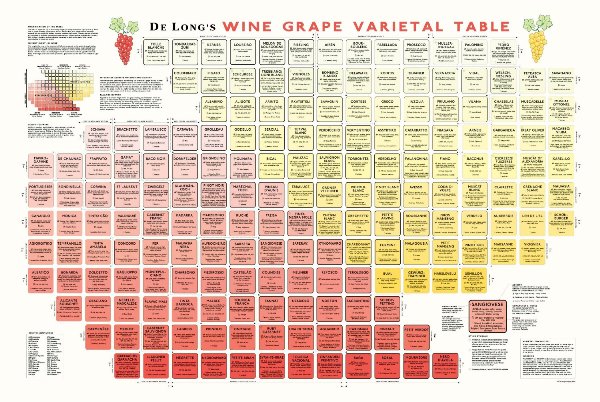 Leroy Creasy, professor of Pomology (Fruit and Vegetable Science) in the New York state College of Agriculture and Life Sciences at Cornell, has studied the resveratrol content in wines and juices for more than 15 years. He’s come to some conclusions about the healthiest wines. He recently completed a study of over 100 wines from 10 different locations world-wide.

Creasy’s study included red wines from New York state, California, Mississippi, Oregon, the state of Washington, Argentina, Australia, Canada, Chile, France, Italy, Slovenia and South Africa. Not surprisingly, New York wines had the highest resveratrol concentration. While the study didn’t note if any of the New York wines were organic or not.

The highest resveratrol content found in Creasy’s study was in Vinifera’s Fleur de Pinot Noir, with up to 4x as much resveratrol as the California wines.

Since resveratrol is made by plants in the face of fungus and bacteria, northern cold and muggy locations traditionally have the most. In fact, WineSpectator.com produced a list of their five healthiest wines. Note that they’re all located in northern European regions:

That’s just a few of the healthiest wines. A Doctor in Australia has recently created a “Resveratrol Enhanced Wine” he hopes to market in the next year or two (2010). He’s currently making a Chardonny and a Shiraz using his new process.

Grapes that are not sprayed with chemicals, or pesticides or other growth producing toxins are considered to be organic grapes. To be an organic wine, however, you have to be 100 percent free from sulphites – which is hard to achieve.

The healthiest wines are not necessarily organic unless they’re also red, were produced with lots of contact between the skin and the vine and were grown in the north. The benefit organic wines have in the warmer southern areas is that they are forced to fight illness and disease without the use of chemicals. Traditionally, this raises the concentration of the healthy nutrients.

Return From The Healthiest Wines to Resveratrol Supplements